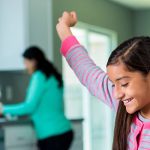 You don’t have to be confident in your own math ability in order to help your child excel.

If you have negative feelings about math, you can avoid passing them on to your child by changing the way you talk about math at home. Instead of telling your child that you are not good at math, or that you dislike it, encourage your child to explore math with an open mind for themselves. Here’s how:

By keeping the way you talk about math neutral — or even better, keeping it positive — you will help your child do better in math.

Read next: 3 things to say when your child says, “I’m bad at math!”